This is just precious. Michele Bachmann, Louis Gohmert, and Steve King, three of the craziest Republicans in Congress, were in Egypt over the weekend to tell the folks what a great democracy they have now that the Muslim Brotherhood has been removed from power. Bachmann even seemed to suggest that the Brotherhood was responsible for the WTC attacks that took place twelve years ago today.

“We want to make sure that you have the Apache helicopters, the F-16s, the equipment that you have so bravely used to capture terrorists and to take care of this menace that’s on your border,” she continued. “Many of you have asked, do we understand who the enemy is? We can speak for ourselves. We do.”

Bachmann has a weird obsession with conspiracy theories surrounding the Muslim Brotherhood. In her most McCarthy-like moment, she stood by a specious charge that Hillary Clinton aide Huma Abedin was a secret double agent of the Brotherhood even after John McCain denounced her for it. Rep. Gohmert, who flanked her in Egypt, signed Bachmann’s letter about Huma to the State Department OIG. This conspiracy theory of a “stealth jihad” has had a real effect in Egypt, where it has fueled absurd rumors that Obama is secretly funding the Brotherhood.

It has also seen plenty of coverage at Breitbart.com (example here) and support from Frank Gaffney’s Center For Security Policy. Both Gaffney and the CEO of Breitbart News took part in Groundswell, the right wing lobbying effort which convinced House Republicans to “investigate” a fake Benghazi scandal. As David Corn reported,

In between the weekly meetings, Groundswellers keep on scheming, frequently using their Google group to share ideas and need-to-know information. The material is often routine: a John Bolton op-ed, a press release opposing the nomination of the EPA administrator, a call to rally support for a Rand Paul filibuster. Often the material reveals the group’s ideological excesses, such as a PowerPoint supposedly proving that John Brennan, the Obama national security adviser who has become CIA chief, is soft on radical Islam.

This might just be the most bizarre political alignment ever: Islamophobia-addled conspiracy nuts who see secret Muslim agents everywhere, but who visit Egypt in search of credulous allies for their cause. In the twelve years since 9/11/2001, the only thing they have learned is how to make friends abroad who hate and fear Islam as much as they do. 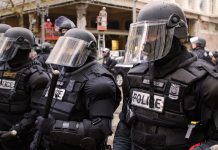 Trump Advocates For Police State Tactics Against US Citizens 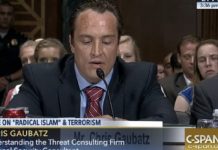 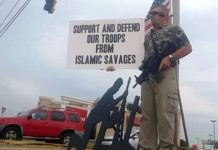