A few months before his death, Andrew Breitbart secured nearly ten million dollars in venture capital from two sources. One of them was reportedly his friend Aubrey Chernick, a right wing Israel-booster who made his fortune in the national security world and uses his millions to subsidize Islamophobia. So what has happened to Breitbart’s Muslim-bashing millions since his death? We ask because as Shirley Sherrod’s defamation case advances to its inevitable conclusion, no one seems to want to own that money anymore.

Shirley Sherrod has clearly been defamed by malicious and sloppy journalism. But U.S. District Judge Richard J. Leon recently said he was “mystified” that attorneys for the Breitbart estate do not seem to know whether Breitbart had a will when he died. In a hearing on Sherrod’s suit against the Breitbart estate, the law firm of Katten Muchin appeared unsure that they even represent Andrew’s fortune. Calling the attorneys “evasive and uncooperative,” Leon read them the riot act and allowed thirty days for them to “‘disabuse’ him of the notion that the defense or the defendants were being uncooperative in the case” before he holds them in contempt of court:

“This court expects a law firm of the stature of Katten Muchin to not be a party to games like this, at least as the court sees it,” Judge Leon said.

“If he died intestate, if he had no will, I want to know it. Point blank,” Judge Leon added.

The full story was posted on September 11th at Law360.com, where you must register to read it. Breitbart News President and CEO Larry Solov managed to draw Judge Leon’s attention at the hearing, and not in a good way. As the head of what remains of Andrew’s blog empire, Solov is the only person who seems at all eager to defend the estate anymore. Katten Muchin apparently wants no part of a losing defamation case.

Wednesday’s hearing started badly from the outset for Breitbart’s side. Breitbart executive and former general counsel Laurence Solov, who attended the hearing and sat initially at the bar, was told by Judge Leon to remove himself after admitting he was not an attorney on the D.C. bar or a legal representative of the party in the dispute.

“What is he doing here?” Judge Leon asked.

“Step back,” he added, telling Solov to sit in the seats reserved for the public.

Sherrod’s lawsuit has proceeded slowly thanks to a series of motions regarding the John Doe in Georgia who provided Breitbart with the video clip of Sherrod. After Judge Leon granted a defense motion to let John Doe answer Sherrod’s attorney’s questions anonymously, her legal team finally got answers to how the clip of her talking about an interview with a white farmer was presented in such a misleading manner.

In a BU exclusive, we have that document (.PDF). John Doe admits that he did not watch the entire speech, so he did not know the context of the clip or Sherrod’s story about the white farmer when he told Andrew Breitbart about it. After two failed attempts to transmit the entire video to Breitbart employee Larry O’Connor, John Doe finally succeeded:

On July 18, Mr. O’Connor told me that the file I had sent on July 14 was of poor quality because of background noise and that we needed to capture it again. I repeated what I had done earlier and also captured the part of the speech where Mrs. Sherrod makes statements about lifetime government jobs being available at the USDA. I sent both video excerpts to Mr. O’Connor through yousendit.com. The following day, on July 19, I mailed a DVD copy of the entire speech to Mr. O’Connor by UPS for delivery on July 20 and sent him an email with the tracking number. From that point on, I had no further role in providing information to Mr. Breitbart or Mr. O’Connor. Like the rest of the public, I read the commentary for the first time when it was published on Mr. Breitbart’s blog.

Mrs. Sherrod’s Complaint contains many incorrect factual assertions about my role in this matter, which was limited to the contacts described above with Mr. Breitbart and Mr. O’Connor. The allegation that I inserted “inaccurate text” into an “edited video segment” of her speech and posted this “edited” video on YouTube is false. I inserted nothing into the excerpts, nor do I posses the skill to perform such a task.

In denying Sherrod’s “incorrect factual assertions” this way, John Doe leaves Larry O’Connor and Andrew Breitbart as the principals responsible for defaming her. O’Connor, who is responsible for the Protective Order for John Doe’s name, was clearly an employee of Breitbart, who bore executive responsibility for the inaccurate text and the clip’s presentation without context. Whatever is left of Andrew in a legal sense, that entity is what must be held to account at trial. But so far, no one wants to admit that any such entity exists.

Perhaps the legal strategy here is to use up Andrew’s millions by extending litigation for as long as possible. If so, we recommend Jarndyce and Jarndyce for your legal research. But we are pretty sure that the weird way this courtroom disaster is unfolding has more to do with the loss of Andrew Breitbart’s authoritarian style. Eulogies about his “unique vision” for a right wing web empire have been a polite way of saying that his blogging inheritors are a pack of venal losers and idiots. As Media Matters’ Eric Boehlert told Dave Weigel,

“I don’t think Breitbart hired very strong editors to work for him,” he said. “Take the Derrick Bell story. The only pick-up it got was in its own corner of the Internet.” He wasn’t impressed at how Fox News covered the story? “I don’t count Fox. In the real world, no one paid attention.” The Daily Show covered the story, too, but we can move on. When Breitbart ran the shop, they scrambled to combat the ACORN tapes and pieces about the past of the openly gay “education czar” Kevin Jennings. The danger seems to have passed. “They’re having trouble sustaining it.”

Andrew Breitbart, who once proudly described himself as a C student on C-SPAN, died surrounded by people who made him look like the smartest person in the room. One of them was Lee Stranahan, who announced he was leaving Breitbart.com over the weekend. He is very proud of his work on the Pigford story, which is related to the smearing of Sherrod.

I can’t blame other people for not having Andrew’s unique editorial vision: it was unique for a reason. But ignoring it is another thing.

And this new editorial policy extended to things like Pigford. I was specifically told several times to NOT cover Pigford.

After the NYT Pigford story hit, we had a spate of coverage but then I was told to stop spending any time on it. Somewhere, Andrew wept.

All that being said, I was able to do work I’m proud of at Breitbart and was supported when I colored inside the lines.

Yes, Breitbart.com is a right wing coloring book. But Solov and O’Connor at least seem to have understood that the Pigford story and its defamatory stepchild were best abandoned before they dragged the whole ship under water. Stranahan, who insists to this day that Shirley Sherrod is an evil person who deserved her defamation, is not smart enough to comprehend the legal exposure that further coverage of those stories would surely create. His ratlike intelligence is good enough to escape a sinking ship, however, and so he has. In fact, he has been trying to find a paying gig outside of Breitbart.com since shortly after his mentor’s death. One of his supporters is Dana Loesch, who is herself suing Breitbart.com for holding her in “indentured servitude” after she tried to find outside work.

Whatever is left of Andrew, it is already being sued into nonexistence. In all likelihood, Aubrey Chernick’s millions will make lawyers very rich while the blog empire he sought to fund bleeds away the minor talent it has left. When judgment finally comes down, we doubt there will be anything left of Andrew’s fortune for Sherrod to claim. 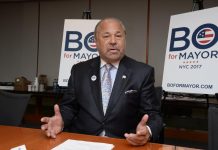 Bannon to Bo: Get the Goods on My Ex! 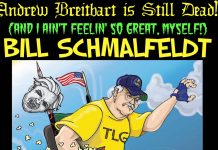 Bottom Falls Out of Breitbart’s Casket