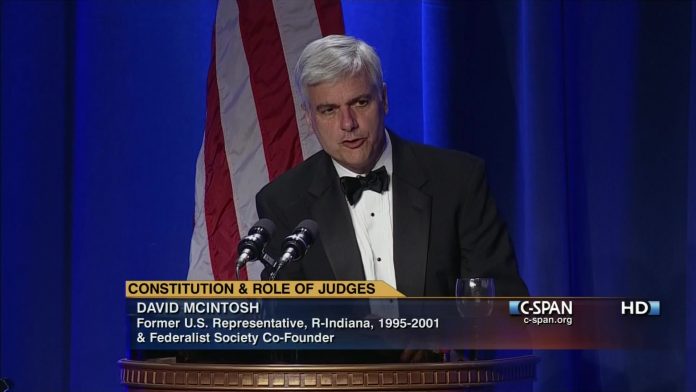 Even though he has always operated inside the Washington, DC Beltway, David McIntosh has enjoyed a consequential career in ‘outside’ conservative politics. He co-founded the Federalist Society in 1982 to address what angry conservatives denounced as an overly-liberal American judiciary in need of reactionary radicalization at all levels. The Society successfully lobbied President George H.W. Bush to remove the American Bar Association from its advisory role in Senate confirmations and influenced George W. Bush’s judicial priorities. Perhaps most crucially, the Society pushes its own ideologues into the federal justice system wherever they can. When he set out to fire insufficiently-conservative US attorneys in 2006, Alberto Gonzales had a list of replacements rated in part by whether they were members of the Federalist Society.

But during Democratic administrations, the Society concentrates on lobbying Congressional Republicans. As the election of Barack Obama brought an end to the era of easy polarization, McIntosh brought all this access and experience to the Conservative Action Project, which he eventually took over from former Reagan Attorney General Edwin Meese. Like the Federalist Society, CAP is a highly secretive organization, but in 2009 it drew national mention for making the tea party movement relevant in Washington. By 2013, McIntosh had helped Meese put together the coalition of outsider conservatives that attacked health care reform and successfully lobbied John Boehner’s caucus to take fifty votes against the Affordable Care Act.

The current budget brinkmanship is just the latest development in a well-financed, broad-based assault on the health law, Mr. Obama’s signature legislative initiative. Groups like Tea Party Patriots, Americans for Prosperity and FreedomWorks are all immersed in the fight, as is Club for Growth, a business-backed nonprofit organization. Some, like Generation Opportunity and Young Americans for Liberty, both aimed at young adults, are upstarts. Heritage Action is new, too, founded in 2010 to advance the policy prescriptions of its sister group, the Heritage Foundation.

The billionaire Koch brothers, Charles and David, have been deeply involved with financing the overall effort. A group linked to the Kochs, Freedom Partners Chamber of Commerce, disbursed more than $200 million last year to nonprofit organizations involved in the fight. Included was $5 million to Generation Opportunity, which created a buzz last month with an Internet advertisement showing a menacing Uncle Sam figure popping up between a woman’s legs during a gynecological exam.

That year, CAP became closely linked to Groundswell, which brought the organization’s ‘outsider’ coalition together with Breitbart.com and Washington Examiner “journalists” to give House Republicans their talking points for a “30-front war on progressives.” Their war plan included Benghazi conspiracy theories and a contrived IRS scandal. From the beginning, the coalition was characterized by rivalry with the party establishment over key culture war issues. If anything, Meese and McIntosh are even more strident now, one year later, for fear the party will soften its hard stance on abortion, marriage equality, and immigration reform. Seeking to gird the party’s loins against all forms of compromise, they held a gathering in Virginia just last week to unite behind that agenda: hold this moral high ground, or lose the votes of ‘real conservatives.’

It included dozens of leaders from across the conservative movement, including tea party organizer Jenny Beth Martin and interest group executives such as Grover Norquist of Americans for Tax Reform and Tony Perkins of the Family Research Council. The meeting, which featured speeches from Sens. Ted Cruz (Tex.) and Mike Lee (Utah), marked the first time this year that prominent national conservatives have come together to candidly assess the GOP and their strategy for shaping it.

The day-long session underscored how simmering tensions between rival factions in the Republican Party appear to be growing, even as polls point to the potential for a major GOP victory in midterm elections in the fall.

Last week’s fizzled “American Spring” protest may have brought an inglorious close to the golden age of large-scale tea party activism, but far right conservatives are digging in to keep their party pure. Republicans hope to continue dividing Congress for the last two years of the Obama administration, and have begun hammering away at Hillary Clinton in hopes of putting one of their own in the White House again. But should these strategies fail, David McIntosh has largely succeeded in his long-term strategy of politicizing the American judiciary, and it might be just enough to preserve the party at the national level.

Start with the Supreme Court, where according to hard data, the conservative wing demonstrates a greater bias than the liberal one. Impartiality simply does not exist in the nation’s highest judicial body anymore, undermining public trust in the institution itself. But the problem is systemic now. Having packed federal courts with the most conservative judges they could find while they held the White House, Republicans have consistently blocked Obama’s nominees for the federal bench to hold back the tide of liberal (or at least less conservative) judges. Clearly, their strategy is to win the presidency back as soon as possible and fill all those vacancies with more of McIntosh’s right wing lawyers instead. To the victor go the spoils, they say — unless the victor is a Democrat.

For conservatives like McIntosh, the spoils come in the form of nullified campaign finance laws so that more dark money can flow into Republican political coffers. And who knows? Perhaps another Bush v Gore-type decision will return them to power in another branch of government one day. Say what you will about David McIntosh’s political views, but his long-term planning is solid, and his efforts will probably still be producing sweet conservative fruit long after tea parties have faded from the national scene.

Video: at CPAC 2012, McIntosh agrees with Maggie Gallagher of the National Organization for Marriage that the ACA contraception mandate is a “government takeover of the moral economy,” whatever that is. 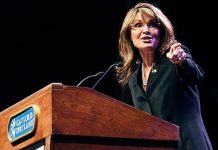 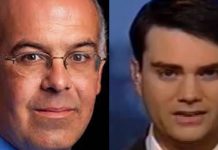 A Debate Of Their Own: David Brooks Versus Ben Shapiro 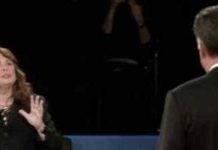