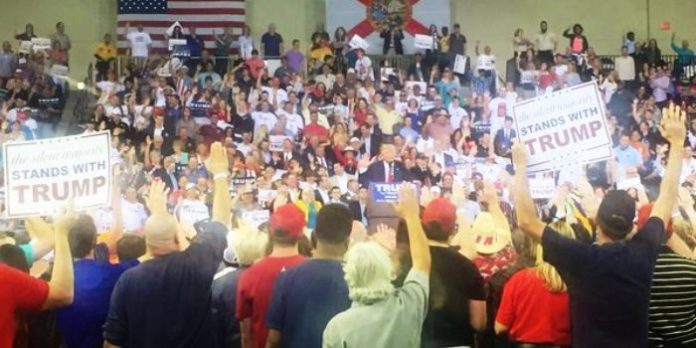 What a bully denies loudest, they generally fear most. As you can tell from the above video, Donald Trump is clearly scared to death that lawsuits against ‘Trump University’ will derail his presidential ambitions. Otherwise, why would he bother making veiled threats, telling bald-faced lies, and spinning facts to his advantage like this?

Start with those “reports” that Trump waves around so much. Those are course evaluations filled out at the end of ‘Trump University’ sessions, when the scam was still in progress and his marks had not yet figured out that they were victims of a fraud. It’s a textbook example of how confidence operators try to make their victims into active participants in the scam. Sited in carefully-arranged venues, ‘Trump University’ sales staff would coax customers into raising their credit limits in order to pay tens of thousands of dollars in fees. One result of such tactics is that feelings of guilt often deter victims from making a complaint — the very technique Trump is trying to use with this video.

As Maria Konnikova, author of The Confidence Game: Why We Fall for It…Every Time said in a recent interview with New York Magazine,

It’s scary how many times con artists don’t break the law at all. They didn’t steal; you willingly handed over cash. The whole premise of the confidence game is that they ask for your confidence, and you give it to them. We con ourselves as much as they con us, because we supply the missing links, we tell ourselves the story that we want to hear.

Con artists use a variety of techniques to encourage strong personal bonds that override better judgment. Because the sales staff for Trump U had no experience in real estate, they emphasized false relationships with Trump in order to instill a sense of trust. After all, participants came to these sessions because they had been watching Trump on their living room televisions for years and therefore thought they knew him. Trump is currently using this technique in the form of raised right hands and the loyalty oaths at his rallies; such acts instill a psychic illusion that the attendee knows him, and more importantly, ‘owes’ him.

But Trump’s fraud is catching up with him. Claiming that thousands of ‘students’ were systematically defrauded of anywhere between $1,495 and $34,995 for a fake real estate school, New York Attorney General Eric Schneiderman is suing Trump for $40 million. A state appeals court gave Schneiderman a green light to proceed last week.

Trump is also scheduled to testify in one of two class-action lawsuits this August — after the GOP nomination process wraps up and the Republican National Convention is done, raising the prospect that he’ll be telling voters how Washington has ripped them off even while on trial for ripping off people who might otherwise vote for him.

Some Trump University students ended up spending about $60,000 on the program and its mentors—who would barely, they now say in court filings, return a phone call or respond to an email. Others got relatively lucky, smelling BS after paying $1,495 to attend seminars where they were told they needed to come up with the money to attend another gathering. Trump, of course, claims his detractors are just a bunch of disgruntled customers, and points all who ask to a website he set up proclaiming that “Trump University has a 98% approval rating.”

Trump went so far as to declare his scam had an A+ rating from the Better Business Bureau during last week’s debate, even handing Fox News moderators a piece of paper that he claimed was a fax from the consumer ratings agency. It was later posted on social media.

But it was all a lie. As you can see, the BBB has rebuffed Trump in a statement of their own:

It reads, in part:

1. BBB did not send a document of any kind to the Republican deabte site last Thursday evening. The document presented to debate moderators did not come from BBB that night.

2. Trump University does not currently have an A rating with BBB. The BBB Business Review for this company has continually been “No Rating” since September 2015. Prior to that, it fluctuated between D- and A+.

Because negative BBB reports gradually expire, ratings for ‘Trump University’ did inflate after it stopped operating in 2010. But that’s exactly like spinning federal prisoner Bernie Madoff as ‘a great guy’ because he hasn’t bilked anyone out of their life savings since he was sentenced in 2009.

Donald Trump is terrified that this story will ruin his public image, and rightly so. He’s supposed to be playing the successful builder and manager who stands up for the little guy, not the fraudulent schemer taking the little guy for a ride.