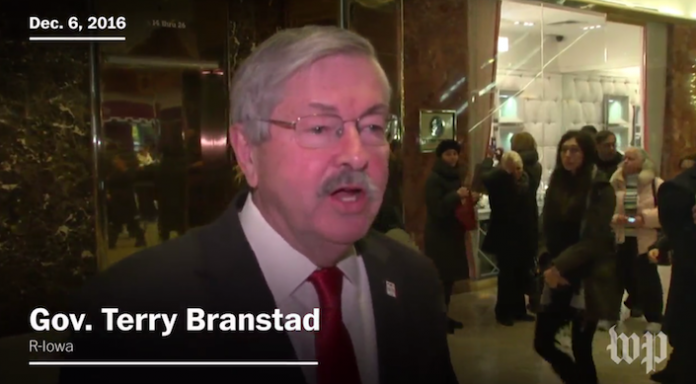 Terry Branstad, the longest-serving governor in US History, has been anointed the new US Secretary to China according to the Washington Post.

The pick of Iowa’s governor to be the face of the US Government in Beijing may indicate Trump isn’t going to play as rough with the Red Giant as he liked to tell his rabid, foaming, red meat chewing supporters he would. Branstad and the Chinese president are BFFs.

Their relationship goes back decades, and it’s one of the most unique in international politics. On his long path to the presidency, China’s Xi Jinping visited rural Iowa in 1985, when Branstad was in his first term as governor, and again in 2012, when Branstad was also governor. (One likely reason Xi chose Iowa to visit in the first place: A growing China has been gobbling up Iowa’s corn and soybean production for the past decade.)

The two got along so well, Xi even invited Branstad to China a couple times. Aides say the relationship is authentic.

“They like each other — it’s not just smile for the cameras, pomp and circumstance,” then-Branstad spokesman Tim Albrecht told the Des Moines Register. “They get along really well, and the governor believes that President Xi is very personable.”

If approved, Branstad’s elevation will result in Iowa having its first ever female governor, current Lt. Governor Kim Reynolds.