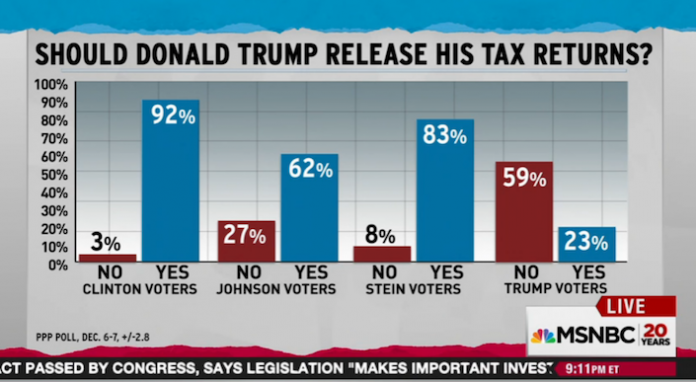 Have you ever had that feeling that’s there’s just somethiing kinda “eeeesh” about people who proudly proclaim they voted for Donald Trump? Are you taken aback by that far-away, glazed-over look in their eyes as they scream “Lock Her Up!” at the mere mention of their vanquished rival (not in the popular vote but, well, you know) and the way they sheepishly believe whatever they’re told by their beloved Gropinführer-elect?

A new poll released by Public Policy Polling shows there’s a reason for that.

They firmly believe things that are provably untrue.

* Stock Market: Since the president was elected, the stock market has soared, nearly tripling since the height of the Great Recession. PPP found that 39% of Trump voters believe the market has gone down under Obama – which is also the exact opposite of reality.

* Popular Vote: As of this morning, Hillary Clinton received roughly 2.7 million more votes than Donald Trump, but PPP nevertheless found that 40% of Trump voters believe he won the popular vote – which is, once again, the exact opposite of reality.

* Voter Fraud: Even Trump’s lawyers concede there was no voter fraud in the presidential election, but PPP found that 60% of Trump voters apparently believe “millions” of illegal ballots were cast for Clinton in 2016 – which isn’t even close to resembling reality.

But they don’t like it. So, they reject it.