Breitbart Unmasked
Home Latest News People Are Surprised That Trump Has A Challenging Relationship With Intelligence? 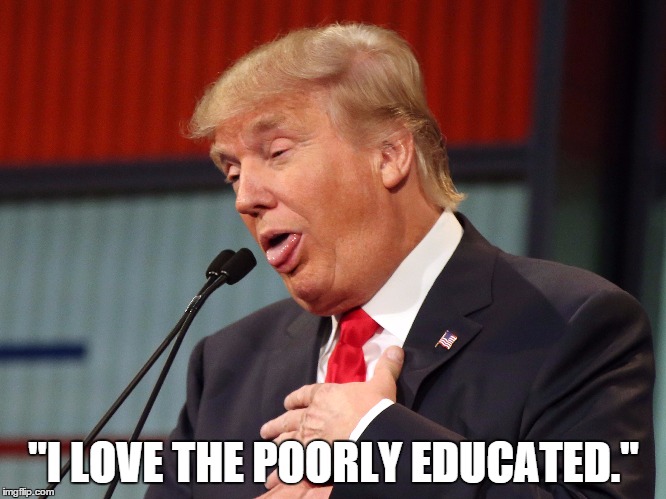 Donald Trump took to Twitter and made a comparison of the intelligence community’s handling of unverified reports on the Russian “PissGate” dossier to Nazi Germany.

Labeling others as Nazis is, for those not indoctrinated in Freudian theory, a primitive defense mechanism known as “projection.”  In intellectual toddler (i.e., Trump supporter) terms, that translates to “no I am not, you are!” Trump takes aspects of himself that he does not like (e.g., Nazi tendencies, tiny hands) and outsources them to others.

Needless to say, the deep state is not pleased with Trump’s latest Twitter tantrum.  Their spokesperson, Central Intelligence Agency director John Brennan, who is presumably blinded to most of their activities, said on “Fox News Sunday” : “What I do find outrageous is equating an intelligence community with Nazi Germany. I do take great umbrage at that, and there is no basis for Mr. Trump to point fingers at the intelligence community for leaking information that was already available publicly.” Indeed, like his psychopathic National Security Adviser Michael Flynn, Trump does not trust the intelligence community and sees it as highly politicized. Moreover, Trump relies on Flynn and Christo-fascist Vice-Fuhrer Mike Pence to give him the Cliff’s Notes version of national security briefings because he is a “smart person” who doesn’t need “intelligence briefings every single day.” Perhaps Secretary of Miseducation Betsy DeVos can produce new episodes of Blue’s Clues to teach Trump about national security. Trump chooses not to present a unified front for the United States of America (U.S.A.) for the eyes of the rest of the world. Instead, the new Demander-in-Chief, a term formerly used by conserva-trolls to label Barack Obama, prioritizes broadcasting his paranoid, delusional mental schemas to reveal a fragmenting U.S.A. The downstream impact of his posturing holds terrible implications for our government and international standing. Where will we go from here as a nation? It beats the piss out of me…