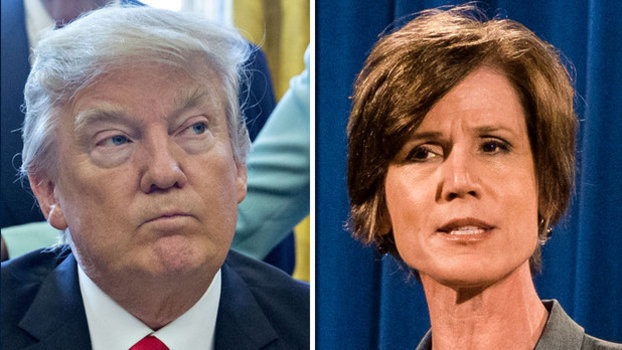 Acting Attorney General Sally Yates took an oath when the Senate approved her nomination to be Deputy Attorney General in 2015. Her oath is the same one taken by every civil servant, up to and including the Vice President.

I, [name], do solemnly swear (or affirm) that I will support and defend the Constitution of the United States against all enemies, foreign and domestic; that I will bear true faith and allegiance to the same; that I take this obligation freely, without any mental reservation or purpose of evasion; and that I will well and faithfully discharge the duties of the office on which I am about to enter. So help me God.

Tonight, Ms. Yates was fired by President Donald J. Trump for following the spirit and letter of that oath. She was fired for defending the Constitution against a domestic enemy — the man who fired her.

“I am responsible for ensuring that the positions we take in court remain consistent with this institution’s solemn obligation to always seek justice and stand for what is right,” Yates, an appointee of former President Barack Obama, wrote to Justice Department lawyers, the New York Times first reported. “At present, I am not convinced that the defense of the executive order is consistent with these responsibilities nor am I convinced that the executive order is lawful.”

Ms. Yates upheld her end of the oath of office. That act of integrity cost her her job.

White House spokesman Sean Spicer said that Yates had been relieved of her duties. Dana Boente, U.S. Attorney for the Eastern District of Virginia, was named as acting attorney general.

Spicer’s statement said Yates had “betrayed the Department of Justice” by refusing to defend Trump’s order. The statement said Yates, a career prosecutor who Trump named as acting attorney general, is “weak on borders and very weak on illegal immigration.”

But she is certainly strong on integrity and living up to the spirit and letter of her oath of office. And tonight, she goes from obscure caretaker figure into American hero.