Breitbart Unmasked
Home Latest News Getting Away With Mayhem 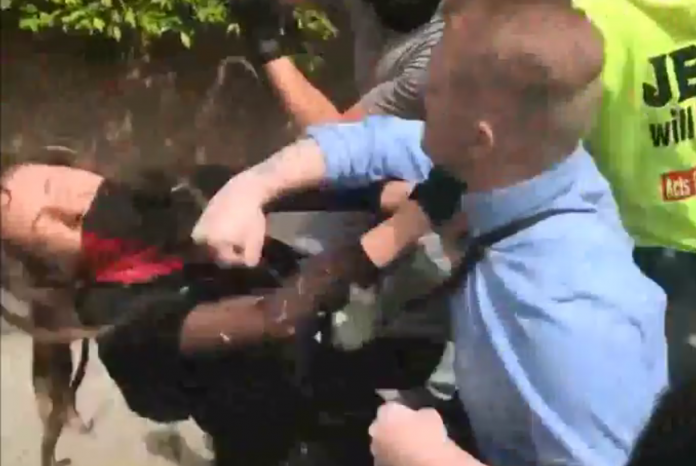 Adolf Hitler didn’t just stroll into the Reichstag and declare himself Fuhrer. He had the backing of a private police force, elements of the military, and a thuggish band of criminals known collectively as “brownshirts.”

Donald Trump may not have an SA or an SS (yet), but he has his “brownshirt base” covered.

Most of the demonstrations held on April 15, which was set aside by progressives for marches to demand that Donald Trump reveal his tax returns, were peaceful. The notable exception was the city of Berkeley, California — often described as the most liberal community in the nation — where things rapidly descended into a street fight between radical right-wingers and more left-leaning counterprotesters.

A group of hard-right extremists came to Berkeley to hold a rally in support of Trump. While they are, of course, claiming that they only resorted to violence in self-defense, it’s clear from the social-media organizing done ahead of time that their intention was to start a riot.

And riot, they did.

Eleven people were injured, and six were hospitalized. One white supremacist identified as Nathan Damigo was filmed sucker punching a young woman.

While there were 21 arrests at this kerfuffle, most of the arrested were Trump Protesters. The brownshirts, Damigo included, walked away unarrested.

In addition to the message this sends to neo-Nazi thugs that it is open season on anti-Trump forces there is an even darker message according to Salon.

Beyond that, the whole debacle is a marketing coup for wannabe brownshirts. White nationalists and other far-right types have been crowing about their “victory” on social media, with many portraying themselves as tough and manly for their behavior. That message will have resonance for the alt-right crowd, which primarily consists of youngish men who have a lot of anxiety about manliness and an intense desire to prove their manhood. To drive home the gendered nature of this message, one female militant right-winger was theatrically “protected” by a group of men, helping drive home the message to anxious young men that the best way to prove their manhood is to use violence against Trump’s political opponents.

Manhood. Punching women in the face. Right. And don’t look for things to get better soon.

As historian Rick Perlstein has pointed out in The Washington Spectator, the amount of online chatter demanding violence against progressives seems to have increased dramatically in the past few months. As has been the case with fascist violence in the past, the hard right excuses its calls for violence by citing “self-defense.”

There’s broken glass on the street, much like a certain “krystallnacht” in the 1930s. Are we headed down that same violent road?