There are a lot of things I expect politicians on both sides of the aisle to weasel about. Should Trump be impeached? Should Jared Kushner be in jail? Was Tiffany Trump abused by her father? PLENTY of weasel-room around those issues.

Saturday, a Nebraska Republican refused to say that human beings are entitled to food.

Rep. Adrian Smith (R-NE) appeared Saturday on NPR’s “Morning Edition,” where he discussed farm subsidies and food stamps, which both would be cut under a budget proposed by President Donald Trump, reported The Hill.

Host Scott Simon asked Smith “bluntly” whether he believed every American was entitled to eat, but the lawmaker refused to give a straight answer.

I promise Congressman Smith that if he were ever my guest, and as long as we have a cat willing to fill its litter box, I would ensure the Congressman had as much to eat as he could stomach. 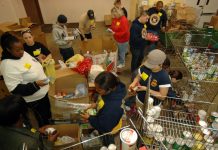 46 Million Americans Rely On Food Pantries, Here’s Who They Are