He had to tell lie after lie to do it, but President Donald Trump kept a campaign promise to the slack-jawed, mouth-breathing dullards, as well as the fossil fuel big wig pigs who got him elected.

The United States joins Syria and Venezuela (which didn’t think the agreement went far enough) as the only three nations on the planet to not be aligned with the Paris Climate Accord.

Accentuated by the sound of applauding cloven hooves and oinking, Trump delivered his darkest, most cynical speech since his woebegone inauguration address in January.

President Donald Trump announced Thursday that the U.S. will withdraw from the Paris climate accord, making America one of three countries not to participate in the historic agreement to combat climate change.

“In order to fulfill my solemn duty to protect America and its citizens, the United States will withdraw from the Paris climate accord,” Trump said in the White House Rose Garden. “But begin negotiations to re-enter either the Paris accord or a, really, entirely new transaction on terms that are fair to the United States, its businesses, its workers, its people, its taxpayers.”

“So we’re getting out, but we will start to negotiate and we will see if we can make a deal that’s fair,” he continued. “And if we can, that’s great. And if we can’t, that’s fine.”

A joint statement from Germany, France and Italy just released says the Accord cannot and will not be renegotiated.

Barack Obama, who (believe it or not) was President once, had this to say about this ultimate betrayal of our future generations:

“The nations that remain in the Paris Agreement will be the nations that reap the benefits in jobs and industries created,” he said. “I believe the United States of America should be at the front of the pack. But even in the absence of American leadership; even as this Administration joins a small handful of nations that reject the future; I’m confident that our states, cities, and businesses will step up and do even more to lead the way, and help protect for future generations the one planet we’ve got.”

They’re taking away our health care which would have taken care of the asthma, lung cancer and water poisoning sure to follow. Why is President Trump trying to kill everyone? 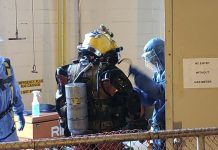