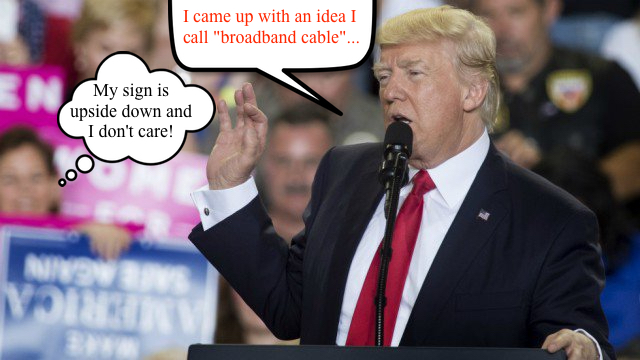 WHAT A GREAT IDEA, MR. PRESIDENT! WAY TO STAY ON TOP OF THE ISSUES AND GIVE THE PEOPLE WHAT THEY WANT!!!

“The time has come for new immigration rules which say that those seeking admission into our country must be able to support themselves financially and should not use welfare for a period of at least five years,” Trump told a crowd in Cedar Rapids, Iowa at the U.S. Cellular Center.

The president said his administration would be “putting in legislation to that effect very shortly.”

WHAT A GREAT IDEA! In fact, it is SUCH a good idea…

THE EXACT SAME LAW WAS SIGNED INTO EXISTENCE in 1996!

Known as the Personal Responsibility and Work Opportunity Reconciliation Act of 1996 (PRWORA), the legislation was passed during the administration of former President Bill Clinton and said that an immigrant is “not eligible for any Federal means-tested public benefit” for 5 years, which starts on the date the immigrant enters the country.

Christ Be Jesus. Does no one CHECK what this polyester-haired dolt says before he says it?