The steady march toward totalitarianism continues while the majority party on Congress sits on its hands and the MSM seems meekly resigned to its own demise.

That would be fine with newly-minted Communications Director Anthony Scaramucci, who in June floated the idea of a state-run news channel.

In private, Scaramucci seemed to have at least entertained the idea of the top communications post since June. Speaking at former GOP presidential nominee Mitt Romney’s private retreat in Deer Valley, Utah, last month, Scaramucci said that he believed the White House was faltering in part because the communications director job was empty and that communicating directly with the public was the key imperative of this White House, according to one attendee.

If he were in the role, Scaramucci continued, he would consider starting a daily administration “television” broadcast at 7 a.m., complete with a desk on the White House lawn and guests that included Democratic leaders.

And from the Devil’s own cloaca comes the report that Breitbart News has the elimination of the MSM as its ultimate goal.

While the GOP-controlled Congress sits on its hands and Trump becomes more and more unhinged in his behavior and his media lackeys are telling the sheep that “everything is fine,” the idea of this White House controlling the news should send a chill down every American’s spine. 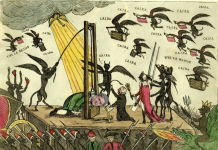