In his loathsome, ramshackle castle in Westminster, Maryland… in a dark room reeking of the stench of old men and moldy bacon, King Hoge III plots his revenge against those who thwarted his “imminent” victory in the Carroll County court. Not content to allow the commoners, Bill Schmalfeldt and Brett Kimberlin, to rest on the laurels of their impossible victory over the omnipotent Hoge, the broken, twisted old man who fancies himself the all-seeing visionary that his readership must bow to in obeisance, the ruler of his imaginary domain rages against the very thought of accepting the decision of a Carroll County judge who foolishly threw out six of the 12 counts he had righteously filed against Kimberlin and Schmalfeldt while granting victory to the unworthy jackanapes on the other six.

The first to feel the pangs of crossing the omniscient one would be Schmalfeldt. The Dark Lord of the Westminster Manor has ordered the judge in the case to review, repeal, revise and amend his decision on Count XII of his doomed complaint. The squatting toad on the throne cannot grasp of the concept that Maryland law does not allow for punitive damages in a breach of contract case. He insists that the judge ignore state law and apply federal copyright law penalties to the breach of contract. In his failing mind he cannot conceive of the fact that copyright law is decided in federal court, not state court.

Schmalfeldt laid out his response to the magical thinking of the Fantasy King of Westminster in the following brief:

Hoge has not formally decided whether or not he deigns to reply to this obviously insufficient argument by the unworthy Schmalfeldt, but he gives clues in his writings to his followers that he is willing to spend all his gold, of which he says he has plenty, to get the revenge his ego so desperately craves.

There was a docket entry last week in the Carroll County Circuit Court regarding King Hoge’s failed lawsuit. It regarded correspondence as to the cost of acquiring transcripts he will need to pursue an appeal of the judges flawed decision. We have obtained a copy thereof and share it with you here. 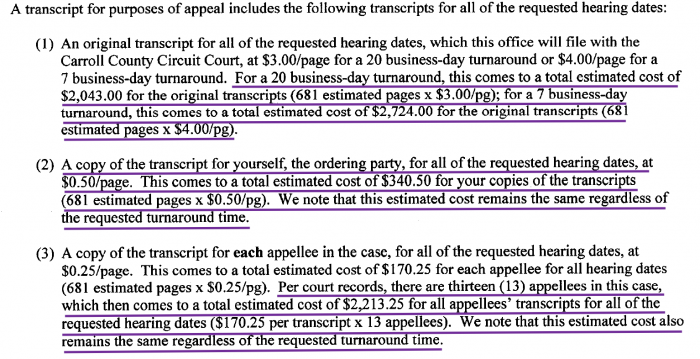 And that’s not all folks! In order to provide 13 copies of the transcript alone, the royal pain will also have to shell out $885.30 at his local Staples store. And he will need more than that. To file an appeal with the court of special appeals he will also have to provide the transcripts from the various hearings that were held during this nearly 2 year long lawsuit, make 13 copies of those as well, then there is the cost of sending the copies to the 13 people he is appealing against. Then there are the various filing fees, etc., and one can see where this misadventure would easily run into the thousands of dollars.

All of this of course presents no problem to the Giant Ham of Westminster who claims he has the cash flow to pay these thousands of dollars and wave bye-bye to them as they go swirling down the toilet.

But then we wondered, if he has all this free cash floating around like flood victims in Florida, why is he engaging the services of a pro bono attorney in our federal case against him at the US District Court for the District of South Carolina? We felt it unseemly that he would brag about all his wealth and how much he makes on a daily basis and how he is willing to pay more than he expects to get in return to an attorney for a debt collection effort.  Having been impressed with the gentlemanly actions of his pro bono in Florence, South Carolina, one Mr. Louis D. Nettles, Esq., of the Folkens Law Firm in Florence, the barrister King Hoge III has tasked with representing him in federal court for free, we felt he should be aware that he may be, in fact, being taken advantage of. So we sent him the following email: 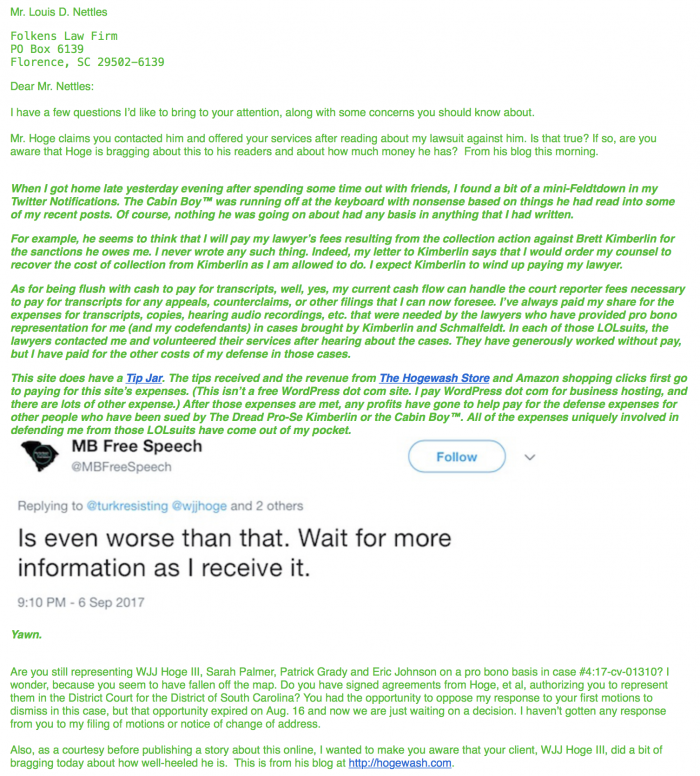 Mr. Nettles replied, and delivered a torpedo amidships beneath the waterline, thus sinking any admiration we had for him earlier.

To which we responded:

And so, here we are. The Liege Lord of Westminster Manor rages to his cat and his smelly, impossibly overweight son, making the cheap paneling and wallpaper designs in their falling-apart abode tremble with each new outburst of anger. He’s willing to spend money like a drunken sailor, knowing that his mindless readership, perhaps including even his fan boy attorney in Florence, will likely hit his donation tab thus further feeding his coffers with gold to be used for this endless war of retaliation against perceived and imaginary wrongs.

A fool and his money are soon parted. One can only hope that this fool eventually runs out of money with which to part. 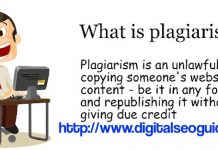 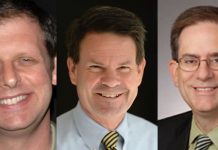 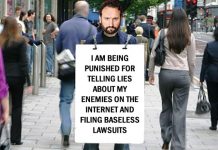