Breitbart Unmasked
Home Idiocracy Franken: Whatever You Do, Please Don’t Throw Me into the Briar Patch! 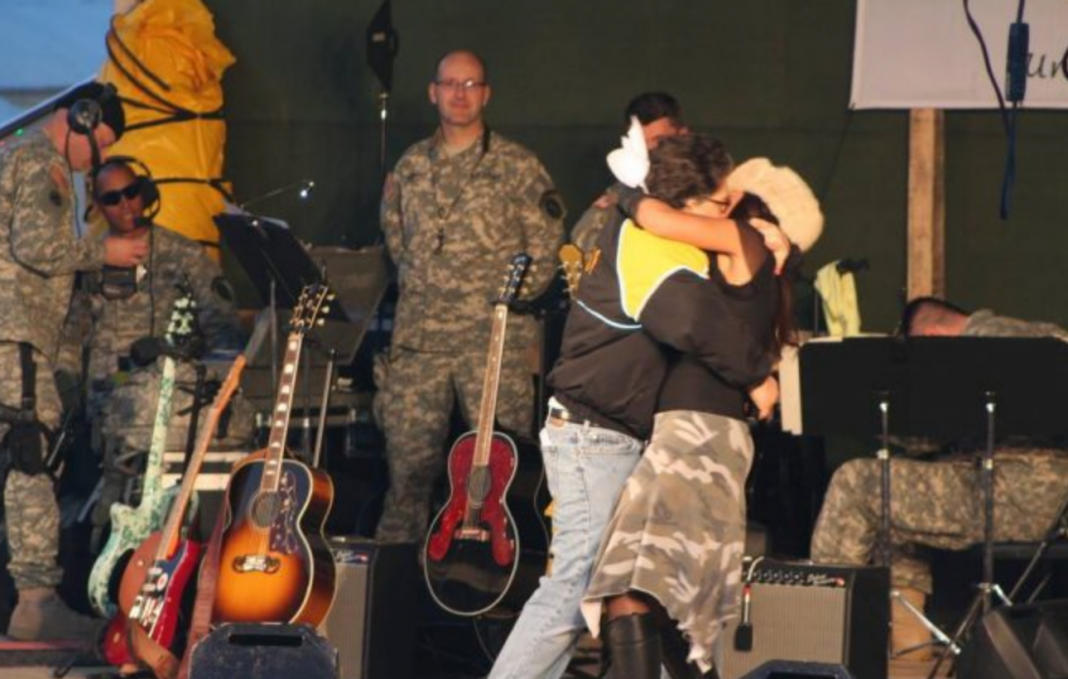 We all remember the famous Uncle Remus story of B’rer Rabbit and B’rer Fox and the Tar Baby.

For those who don’t recall this delightful chestnut from our rich, racist past, the fox created a manikin made of tar and set it on a log. The rabbit came skipping by and it tried to strike up a conversation with the tar baby. The tar baby, being made completely of tire, did not respond to the rabbits overtures. This made the rabbit very angry because if there’s one thing a rabbit hates it’s when his attempts at initiating a conversation are rebuffed. The rabbit lashes out at the tar baby only to find himself tangled in the stick sticky goo. The fox comes along and begins to make all manner of pronouncements of diary and painful portend for the rabbit suggesting he might hang him or drown him or maybe even chop them into little rabbit bits. The rabbit pleaded with the fox, begging him, “Whatever you do please don’t throw me into the briar patch!”

Hearing that the rabbit feared the briar patch more than any other torture the fox could think of, the fox threw the rabbit and tar baby into the briar patch. The thorns and branches causes the tar to be scraped away from the rabbit who skipped away taunting the wolf, crying, “Born and bred in a briar patch.”

On November 17, Leeann Tweeden informed the world that she had been groped and kissed against her will by the Minnesota Democrat. Given the current climate with the hashtag “#MeToo” trending, no one wanted to question the young lady’s motivation for coming forward. That is not a proper thing to question when a person claiming sexual abuse comes forward no matter how many years after the fact it occurred.

There are a lot of things you can call Al Franken. “Stupid” is not one of them. He called for a senate ethics hearing on himself.

Why did he do that? Ostensibly, according to Franken (who said he didn’t remember the incident quite the same way Weeden did) he called for the hearing so the Senate can get to the bottom of what actually happened.

Franken knew that denying it outright was not the way to go. That’s the Roy Moore way. That’s the Harvey Weinstein way. Franken said although he didn’t remember it quite the same way, he can understand why a woman would be upset if placed in that sort of situation. I’ll full and thorough senate ethics investigation will bring out all the facts.

Here are some things we have since discovered.

We will not discuss this woman’s past as a model because that is what “slut shamers” do. We will discuss the fact that Trump operative Roger Stone hinted about Franken’s upcoming tribulations on his Twitter account the night before this alleged event was revealed, back in the day when Roger Stone had a Twitter account. We will discuss the fact that Sean Hannity has introduced Weeden as a frequent panelist on his show. And we will present some photographic evidence that you may find it intriguing.

#1. Leeann Tweeden was a frequent guest on the Sean Hannity show.

#2 From the looks of things, 2006 was not the first time Franken performed the “kiss sketch” in front of a USO show. Here he is with actress Karri Turner from the TV show JAG, at a USO show on December 18, 2003 at Camp Arifjan in Ahmadi, Kuwait.

#3 Doesn’t that appear strikingly familiar to the scene Weeden describes in her tell-all account?

He repeated that actors really need to rehearse everything and that we must practice the kiss. I said ‘OK’ so he would stop badgering me. We did the line leading up to the kiss and then he came at me, put his hand on the back of my head, mashed his lips against mine and aggressively stuck his tongue in my mouth.

I immediately pushed him away with both of my hands against his chest and told him if he ever did that to me again I wouldn’t be so nice about it the next time.

I walked away. All I could think about was getting to a bathroom as fast as possible to rinse the taste of him out of my mouth.

I felt disgusted and violated.

Not long after, I performed the skit as written, carefully turning my head so he couldn’t kiss me on the lips. 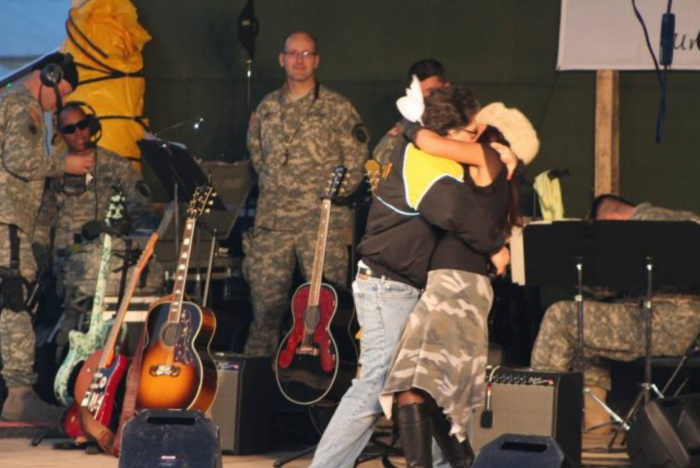 I am no expert on sexual assault. Is it common for the victim to wrap her arms tightly around her assailant’s neck and lift her left leg to hold on to keep from falling due to the forceful brutality of the attack?

She said it happened at a rehearsal when no one was around. This was clearly a rehearsal as none of the guys in the background appear in the video of the actual show. And Franken was dressed as Saddam Hussein in the actual skit as performed. 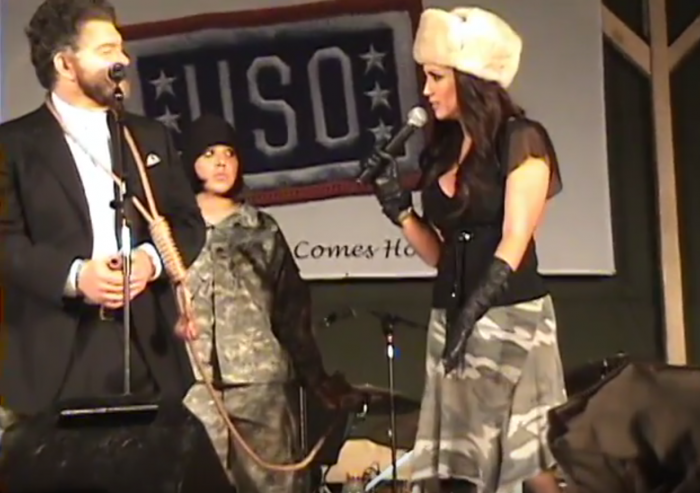 We only hope that country singer Mark Wills got the counseling he needed after Weeden rubbed herself against him like a cat marking her territory before getting his left buttock grabbed by the right wing Trump donor earlier in the show.

So, throw Senator Franken into the briar patch. If this is a set-up designed to divert attention away from Trump’s pee-pee peccadillo or Roy Moore’s Minor Molesting at the Mall, we can’t think of a better place for the truth to come out.

Remember, Roger Stone tipped us off that it would be Franken’s turn in the barrel the night before the revelations became revealed.