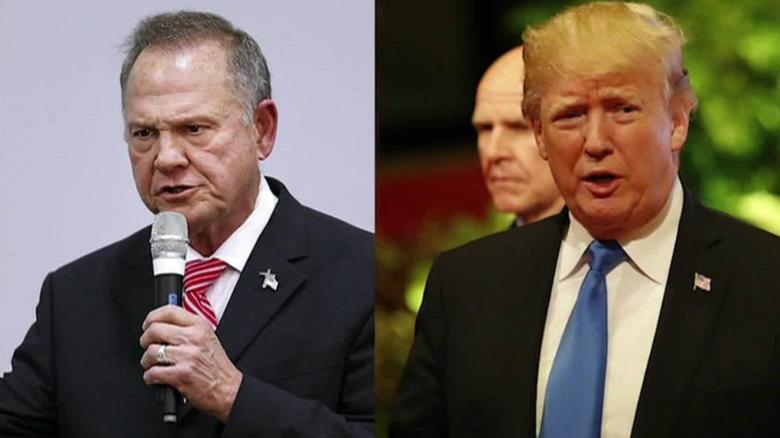 Proving once again that the glass on his moral compass is shattered, President Donald Trump officially endorsed Roy Moore, the GOP nominee for Senate in the upcoming Alabama special election.

Democrats refusal to give even one vote for massive Tax Cuts is why we need Republican Roy Moore to win in Alabama. We need his vote on stopping crime, illegal immigration, Border Wall, Military, Pro Life, V.A., Judges 2nd Amendment and more. No to Jones, a Pelosi/Schumer Puppet!

Putting Pelosi/Schumer Liberal Puppet Jones into office in Alabama would hurt our great Republican Agenda of low on taxes, tough on crime, strong on military and borders…& so much more. Look at your 401-k’s since Election. Highest Stock Market EVER! Jobs are roaring back!

Moore, accused of molesting a 14-year old girl, as well as making sexual advances toward teenage girls when he was in his 30s, causing him to be banned from the Gadsen, Alabama, shopping mall, was grateful for the President’s decision to put tax cuts for the wealthy ahead of the safety of children.

The America First agenda will #MAGA. Can’t wait to help him #DrainTheSwamp.#ALSEN https://t.co/pYu9h7TYVN

By endorsing Moore, former Chief Justice of the Alabama Supreme Court, unseated twice from the court for refusing to obey court orders, Trump speaks for a party that approves accused child molesters and proven lawbreakers — calling them tough on crime — over people like Democratic challenger Doug Jones, a career prosecutor who brought charges and convicted Klansmen for the bombing of a church in which children were murdered.