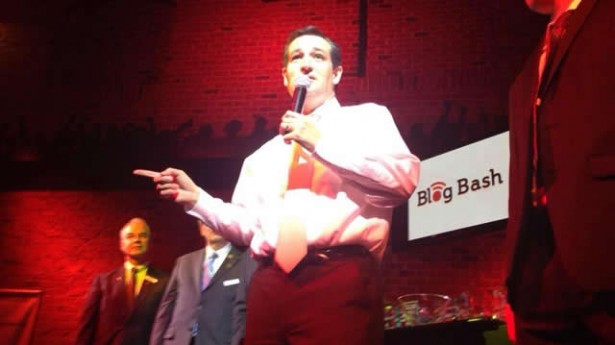 Brietbart News, LLC announced Tuesday that they are being audited by the IRS. This is absolutely not a surprise to anyone who has paid attention to their business practices, but of course the website proclaims that the whole thing is a sinister plot by the Obama administration to shut them up. If this sounds familiar, that’s because conservative pseudo-intellectual Dinesh D’Souza was saying basically the same thing not too long ago before he pleaded guilty.

Nevertheless, Breitbart.com got an immediate boost from Senator Ted Cruz (R-Wingnuttistan), who published an open letter to the IRS commissioner asking “how many other news organizations have been audited since President Obama has been in office?” But this is the wrong question to ask. Instead, Cruz should be asking how many news organizations have as rich a history of shady finances and opaque operations as Breitbart News does.

Start with the way the organization’s namesake screwed his ad partners over in 2006 and then settled with them for $55,000. Although it has been impossible for me to confirm, sources indicate that the settlement over ‘Next Gen’ may have induced Andrew Breitbart to distribute content on his “Big” sites — Big Journalism, Big Hollywood, etc. — for the next six years so that he could avoid financial liabilities related to the settlement.

It’s worth noting that the IRS is reviewing the site’s finances for 2012, which is the single most interesting period of time they could investigate, as it’s the year Breitbart died in the middle of an important transition.

A proud C student, Breitbart made sure he was the smartest person in the room by hiring low-rent people who would eat from his hand. He was also an authoritarian whose hand guided everything. This became readily apparent shortly after he died in 2012, when the ‘Big’ sites were all suddenly changed to Breitbart.com without redirecting the old URLs, cutting off search engine and social media traffic to the old content.

This move had been poorly-planned before his death, and was poorly-executed afterwards. Not only was it a preview of mismanagement to come, my sources suggest the switch was made to avoid tax liabilities related to the way Andrew had avoided his contractual liabilities after 2006.

The Next Gen lawsuit is also interesting because it names Andrew’s wife as a co-defendant. He died intestate, having never bothered to give her any kind of legal cover, so she remains the responsible party to answer legal action against his estate. And his fortune might have been considerable in 2012: Andrew reportedly collected almost $10 million in venture capital funding from two big donors a few months before his death, but it’s not clear what happened to that money, and the organization has done everything possible to keep anyone from finding out.

Indeed, that money might be unaccountably gone, since profiteering is the rule at Breitbart. When was the last time you heard of a news channel whose staff charged people to cover their events?

Finally, Sen. Cruz might also want to look at the way Breitbart News treats its employees, because the IRS could be investigating accusations by a whistleblower. In his letter to Koskinen, Cruz complains about the “burdensome paperwork” that all such IRS audits require. Look at how many of these items are related to payroll:

…all of its organizational documents, financial records, W-2s, W-4s, 1099s, and K-1s filed, personal income tax returns for each member of the company, payroll tax forms, information regarding properties and assets acquired by the company, bank statements, and array of other records documenting revenues, expenses, and depreciation costs. (Emphasis mine)

Contracts at Breitbart News are notoriously one-sided affairs bound in oppressive confidentiality agreements. Employees who wish to pursue other opportunities must often sue the organization to be let go. Writers have also reportedly been paid as contractors instead of employees, even though they were required to maintain a presence on the site just like regular staff. Morale is low because plagiarists are rewarded better than reporters.

A violation of wage laws related to the company’s finances would be enough to spark an IRS audit at any newspaper or TV news studio in America. So would an audit on an outside agency — like an employee-‘contractor,’ for example. In his letter, Sen. Cruz doesn’t even bother to ask whether this investigation has been triggered by another audit, which is what you might expect with such sketchy practices abounding.

Andrew Breitbart never did follow the same ethical or journalistic rules as “traditional media,” and it is not inconceivable that he evaded taxes or that his electronic heirs broke the rules somewhere in 2012. So instead of allowing Sen. Cruz to invent another IRS persecution conspiracy theory, reporters on this story should ask him to explain how Breitbart News is so special that it must be allowed to operate unlike a legitimate media organization — or for that matter, a legitimate business of any kind.