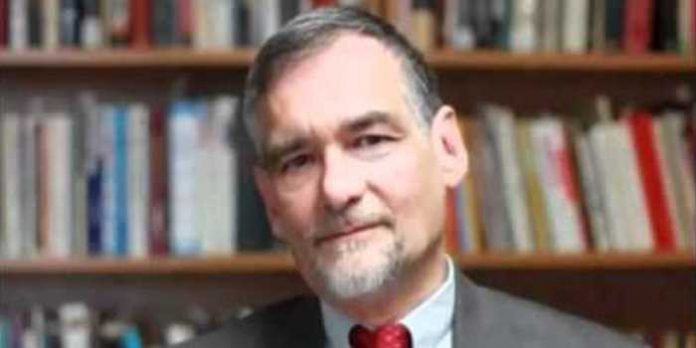 Seen above, Mark Weber has perhaps done more than any American except Willis Carto to popularize denial of the World War II Holocaust, and while he has lived comfortably it has never exactly made him a wealthy man. There aren’t many employers looking for Jew-hating revisionist historians, and despite Weber’s efforts to recruit historians by direct mail, the topic area is not exactly respected in academia or mainstream media.

So maybe it’s not a surprise that nothing has divided the Holocaust denial ‘movement’ more than money: racial supremacists are a cantankerous and quarrelsome bunch by nature, so if you throw lucre into the ring, they will scrap like angry dogs for years at a time. There are few better examples of that phenomenon than Weber’s career leading the Institute for Historical Review (IHR), a period consumed by a war with its founder, Mr. Carto. The once-prominent pseudo-academic organization has greatly declined during their feud, which goes back nearly two decades.

The reason I bring all this up now is that a BreitbartUnmasked.com review of Weber’s 2013 IRS 990 filing for the ‘Legion for the Survival of Freedom, Inc.,’ a non-profit organization which controls the IHR, shows a sudden tenfold jump in income. Whereas the Legion normally takes in a little over $100,000 per average annum, Weber’s anti-Semitic, authoritarian, and racist organization was the recipient of more than $1 million during the 2013 calendar year. Sure, it’s possible that Charles and David Koch have slipped Weber a pile of scratch, but it’s much more likely that Weber finally received some part of a legal judgment related to a years-long dispute between the Holocaust deniers over control of a large bequest.

And all of that comes before the surprising, mysterious plot twist.

Willis Carto has been a fixture on the fringe of the radical right since the 1950s, when he emerged in the nation’s capital as the leader of the anti-Semitic ‘Liberty Lobby.’ By the time he founded ‘Youth for Wallace‘ in 1968 to support the racial supremacist platform of Alabama Governor George Wallace, Carto had already lost or burned most of his bridges into the respectable world of DC lobbyists thanks to his extremism; in fact, he was disavowed by the John Birch Society. Yet by the early 1970s, Carto is also credited with swinging Lyndon LaRouche and his cult away from their Marxist origins and into the world of paranoid right wing extremist politics.

A decade later in 1978, Carto founded the IHR to lend his bizarro-world conspiracy theories an intellectual facade. That same year, Weber became an editor of the National Vanguard, a newsletter published by one of the biggest neo-Nazi groups in America, attracting Carto’s attention. Before the end of 1979, Weber was writing for Carto’s anti-Semitic tabloid magazine The Spotlight; by 1984, he was organizing IHR’s annual conferences of quacks and haters, often bringing a ‘mystery guest’ to liven up the atmosphere. To the delight of attendees, in 1987 the surprise speaker was none other than Otto Ernst Remer, the unapologetic Nazi officer who quashed a 1944 assassination plot against Adolf Hitler.

But if Carto was happy with Weber’s promotion to editor of the IHR’s crank publication Journal of Historical Review after 1992, things changed when Weber supported a board coup against him a year later. Also, remember that this was the same year David Duke was running for president as a Republican and consciously projecting a new, updated, better-dressed kind of Ku Klux Klan Grand Wizardry. I’ll let the Southern Poverty Law Center pick up the narrative here, emphasis mine:

In 1993, with Weber’s support, the IHR board ousted Carto as its leader, accusing him of interfering in editorial decisions. The next May, Carto and his wife tried to retake IHR by occupying its California offices, a situation that led to fistfights and, ultimately, Carto being forcibly removed from the building. At around the same time, another dispute between IHR and Carto broke out, with IHR leaders accusing Carto of diverting some $10 million that was allegedly left to IHR’s parent company, the Legion for the Survival of Freedom.

During the decade of complex litigation that followed, Carto’s Spotlight characterized Weber as a “rat,” a “cockroach” and a “devil,” but in the end Weber’s side basically won. The Spotlight was shut down as a result of the litigation, although it was rapidly replaced with the look-alike American Free Press. Carto also created The Barnes Review, a Holocaust denial journal that now competes directly with IHR.

A month after the September meeting in which he was ousted for his autocratic and paranoid leadership as well as his plans to replace Holocaust denial ‘research’ with overtly-racist pamphleteering, Carto attempted a forceful takeover of the IHR building and had to be dragged away by police after a flurry of blows. The board members were particularly concerned about the fate of cash certificates that Thomas Edison’s granddaughter had left IHR in an outlandish bequest.

(Jean Farrell) Edison, the granddaughter of Thomas Edison, was a heiress to the Edison fortune who died in 1985, leaving conflicting instructions about the dispersal of her estate. A handwritten will bequeathed the money–then estimated at $40 million–to a South African-born woman who was Edison’s neighbor in Switzerland.

The Legion also had a claim to the money because Edison left further instructions that only a Legion representative could open the four safe-deposit boxes in Europe, Asia and the United States, which contained cash certificates for the money.

Three of the boxes and $20 million in certificates were found, according to Suall of the ADL, who said the fourth box in Singapore was never located. The Legion and the neighbor fought over the money in Swiss courts, eventually splitting the estate in 1990.

Although a judge determined in 1996 that Carto had indeed siphoned $6.43 million from the IHR, and ordered him to repay it with interest, in 2001 Weber still lamented the endless litigation, acrimony, and smears — especially when Carto approached Weber’s estranged wife to weaponize her anger. It was just one of the nasty tactics employed in this war:

Since late 1993, Willis Carto, the man who controls The Spotlight and Liberty Lobby, has been using the paper to attack the IHR, telling readers that I, together with other evil “conspirators,” “thugs,” “crooks,” and “criminals,” have subverted and destroyed the IHR by turning it over to control by the CIA, the Israeli Mossad or the Church of Scientology, or combinations of all three. […]

(A)n item on the front-page of the January 22 issue […] encouraged readers to telephone Harvey Taylor and Jack Riner, “two sincere patriots [who] have been unwitting pawns in the conspiracy to destroy Liberty Lobby and The Spotlight.” Taylor and Riner are long-time IHR supporters and members of the Board of Directors of the IHR’s parent corporation. Readers were told that “Taylor and Riner have been manipulated by Mark Weber and his CIA handler, Andrew Allen.” The paper gave their private home telephone numbers. More than 30 persons called Taylor, one of them to threaten his wife.

The Spotlight was shut down by a court order in 2001. With publication slowed by the distraction and demoralization of Weber’s staff as well as a diminished fundraising list, IHR finally shut down its journal in 2003. At one point, IHR had been the closest thing to a consensus institution in the American neo-Nazi movement. However crackpot and warped its ‘research’ might be, the Institute was at least a basis on which resistance to the imaginary Zionist New World Order conspiracy of Bilderbergers might coalesce. Without that shared alternate history novel acting as a pseudo-intellectual glue, the neo-Nazi movement has never recovered its former unity of purpose or organization.

And in all likelihood, Weber’s million bucks are a sign that Carto finally started forking over the dough in 2013 after seventeen years of resistance — which brings us to a very important question.

How many Scientologists will spend this money?

In 2014, Weber put his newfound wealth to use attending Holocaust denial meetings in Europe, rebuilding the IHR’s publishing operations, and holding nine meetings with fellow revisionists and neo-Nazis in the United States. There are five people on the Legion’s 2013 IRS 990 (.PDF) to help him spend the windfall: Gerald Domitrovic is a Kansas attorney who has participated in IHR events since at least the late 1980s; right now, Tom Bevington appears to be a relatively new presence; Richard Herman is a retired oil engineer whose ostensible message of ‘justice for Palestine’ provides a thin cover for his rabid anti-Semitism; Secretary Kelly Mangiagli seems to run a vintage clothier in Los Angeles, where I assume she occasionally has Jewish customers.

But the name Greg Hubbard is tantalizing, because Weber does in fact have abiding ties to the Church of Scientology, after all. Whatever else Carto may have said about the coup that ended his leadership, he was not wrong about this. Tom Marcellus, who was identified by a 1989 news article as the Director of IHR, is a Scientologist. He was also the primary instigator and antagonist of the coup and the key witness in the key lawsuit of the whole saga, and his name appears and reappears on the Legion’s public documents. Weber himself is said to be a Scientologist, and upon taking over the IHR he devoted resources to publishing and disseminating defenses of Scientology from its critics.

Scientology’s keen interest in Holocaust revisionism is a major reason why the German government monitors the cult of L. Ron Hubbard, whose imaginary history of the Second World War blames Jewish psychiatrists for the mass deaths of Jews. Scientology critics have been talking about this issue for years because it’s not just a phenomenon on the fringes of the cult, but seems to be an actual church doctrine. For example, David Miscavige, the current leader of Elron Hubbardism, has discussed the Holocaust in front of Scientology audiences thusly:

Miscavige then tells us the horrors of the Holocaust “did not begin with a Nazi declaration of war”.

He says: “The bureaucracy, the methodology, even the ideology for mass murder, sprang fully-armed from the forehead of German psychiatry.”

[…] He goes on to claim that psychiatric euthanasia centres had already claimed 70,000 lives by 1939.

“And that was not the Holocaust,” he adds, smugly.

“That was just the dress rehearsal.”

Every few minutes the crowd is on its feet, hooting and hollering.

Greg Hubbard has been on the organization’s IRS 990 forms for a long time. In fact, he is the Registered Agent in California for the Legion for the Survival of Freedom, making him an IHR ‘original gangsta,’ as the kids might say. Legally speaking, the organization lives at his house in Orange County, where he holds a vanity call sign as an amateur radio operator, so he’s going to have an enormous influence on what happens to any funds recouped from Willis Carto.

Is Mr. Hubbard a Scientologist? Despite reaching out to the best experts available, I have been unable to confirm the answer yet, but there is (or was) a Greg Hubbard listed as a ‘suppressive person’ according to Operation Clambake. Someone by that name therefore seems to have been involved with Scientology at some time; as ex-Scientologists have a diversity of reactions to their experience — witness Mark Rathbun, the best-known ‘squirrel,’ or unauthorized practitioner of L. Ron Hubbard’s ‘technology’ — it is not irrational to ask the question.

And so we end on a note of mystery. Was the long, dirty, public fight for control of the nation’s best-known Nazi-apologetics and Holocaust denial institution in fact a power-grab by the Church of Scientology? Rest assured I will stay on top of this story.

What Was ‘The Last Straw’ for the Synagogue Killer 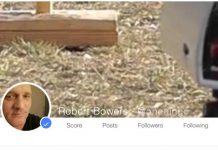 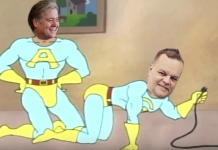