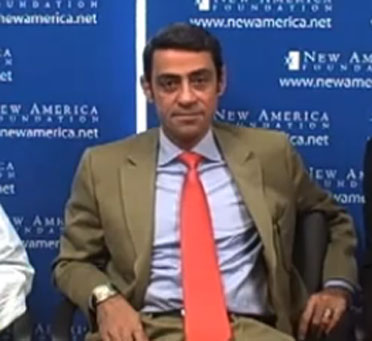 The annual Conservative Political Action Conference (CPAC) is famous for its parties, including Blog Bash. But only Breitbart News, LLC has a permanent venue for their party: “the embassy,” a $2 million home in Washington, DC. The address belongs to Mustafa Elgindy (spellings vary), a unique character in contemporary Egyptian politics. The website’s relationship to Elgindy offers some hints about the current direction, and perhaps even funding sources, of Breitbart News.

Daily Caller writer Betsy Rothstein shrugged off a great deal of flak for her reporting on the festivities that took place last weekend. Apparently, Breitbart’s acolytes did not want us all to know the depths of their debauchery.

In an email bearing the subject line, “The Breitbart party was the sickest shit ever,” a guest described it like this:

Elgindy is a former Egyptian parliamentarian who operates cruise boats on the Upper Nile with his brother. He is Muslim, but within the context of Egyptian politics his politics are rather liberal. In 2000, for example, Elgindy was behind an international “wealth redistribution” program in which tourism companies paid 1% of profits into local development plans. As a member of parliament in 2009, Elgindy pressed the Mubarak regime to implement orders by its Egyptian courts reinstating Al-Shaab, an opposition newspaper that it had closed down. He became prominent as an opposition leader by organizing popular demonstrations in Tahrir Square. A nominal independent, Elgindy has an on-again, off-again relationship with the New Wafd Party. He joined it during the early days of the 2011 revolution, then parted ways that October over the inclusion of former regime members on their parliamentary lists. In the January 2012 election, the secular Wafd finished a distant third behind the Muslim Brotherhood’s Freedom and Justice Party (FJP) and the Salafi Al Nour Party, both Islamist organizations. Clearly, there is not much room for men like Elgindy in Egypt’s fractious political scene.

So what could unite an iconoclastic Egyptian liberal with the right wing Breitbart News? The answer is simple: they both despise the Muslim Brotherhood.

Even as he hailed their union with other opposition parties at the beginning of the revolution, Elgindy minimized the role of the Muslim Brotherhood in the Tahrir Square protests. After the January 2012 elections, he objected to Islamist control of the People’s Assembly, and by the Summer of that year he was voicing opposition to US support of the FJP government. When Egypt’s army swept the FJP from office in 2013, Elgindy told Breitbart.com Washington editor Mike Flynn that the Muslim Brotherhood was “finished” — and in the process, he endorsed a conspiracy theory that happens to be very popular with tea parties.

On Monday, an Egyptian court banned the Muslim Brotherhood and ordered all its assets seized. Many observers see this as a temporary setback, as the Brotherhood was outlawed for much of its existence in Egypt. Gindy says that is wrong. “No. They are finished. The people know now what shits they are.”

Gindy said that within 15 days of Morsi’s removal from power, 90% of the Brotherhood leadership were apprehended. “It wasn’t the police,” Gindy said. “It was the people. A street worker, a janitor, a barber would see one of them and call the police. They would report them. They have no place to hide anymore.”

Gindy thinks Americans underestimate the impact of the Brotherhood’s downfall. “They are everything in the region,” Gindy said. “They got people against each other. They were the head of the octopus. Now they are gone.”

This notion of the Muslim Brotherhood as the bogeyman behind everything that goes wrong in the Middle East happens to fit very well with the paranoia-addled politics of the American right wing fringe, which sees “creeping Sharia law” at work in the region and has found new allies in Egypt. It is a favorite theme at The New American website of the John Birch Society, for instance, and a constant refrain on Glenn Beck’s webcast. As the foremost congressional advocate of this conspiracy theory, Michele Bachmann accused State Department employees of being sleeper agents of the Muslim Brotherhood and has repeatedly suggested that the organization was behind the 9/11 attacks. All of this might seem like the ravings of drunken lunatics, but at CPAC that is in fact the case.

Will the news that Elgindy hosts decadent American parties damage his image within the pious world of Egyptian politics? Will content at the planned “Breitbart Cairo” vertical reflect the staff’s relationship to Elgindy? Is the wealthy tourism magnate responsible not just for hosting their party, but financing their website alongside Israel-booster and Islamophobe Aubrey Chernick? Rest assured that we will stay on top of this story until we have answers.