Rush Limbaugh is a millstone around the neck of the talk radio format.

The nation’s largest radio broadcasting company, Clear Channel, has been shedding jobs for a while now. Despite rebranding itself as iHeart Communications, the company remains mired deeply in debt thanks to a 2008 private-equity deal with Bain Capital and Thomas H. Lee Partners. Facing a negative cash flow, iHeart Communications is moving into digital radio because broadcast revenue is expected to be flat until 2018. Their junk bonds are among the riskiest on Wall Street, rated CCC, which means “currently vulnerable to nonpayment,” “substantial risk” and “extremely speculative.” Rather than pay off their debts, iHeart Communications is finding creative ways to delay the inevitable — and offering higher interest to attract capital to their very risky terms.

Clear Channel has never been profitable since the Bain deal, but the fiscal year ending in June 2013 saw the company’s first cash-flow deficit in four years. So what happened in 2012? StopRush is what happened. Limbaugh’s disgusting three-day tirade of misogyny against Sandra Fluke spawned a huge reaction in social media and blogs, leading thousands of volunteers to start a divestment effort aimed at convincing sponsors to pull their ads from his program.

When iHeart Media Chairman and CEO Bob Pittman recently told Bloomberg about his company’s positives, he listed Ryan Seacrest — but not Rush Limbaugh. In fact, the talk format is fading from the FM band as Limbaugh keeps losing stations and declining in the ratings. In May 2013, Lew Dickey, the CEO of America’s 2nd largest broadcaster, Cumulus Media, specifically blamed Rush Limbaugh’s toxic brand for low revenues, while Radio Ink reported that 48 of the top 50 network advertisers had excluded Rush from their ad orders.

Since that time, Limbaugh’s show has featured so few real commercial breaks that StopRush activists have been reduced to asking nonprofits to pull their PSAs. Volunteers have found themselves contacting smaller and smaller businesses because almost all the big corporate sponsors have pulled their advertising. The resulting cash crunch has been so bad that FreedomWorks has started subsidizing Limbaugh’s salary.

While there are surely some people who love Limbaugh, his brand is absolutely toxic outside that fan base. His show long ago passed outside the bounds of respectable office listening, for example. With such a narrow audience, he just keeps getting worse: in the weeks since Limbaugh’s comment belittling sexual consent, “no means yes if you know how to spot it,” a petition posted by the Democratic Congressional Campaign Committee to his advertisers has gotten nearly 350,000 signatures. Rush Limbaugh is surely popular, but he is also incredibly unpopular.

So what’s an overpaid, underperforming, bigoted misogynist to do in these circumstances? Hire a hitman, of course!

One year before Limbaugh’s tirade galvanized the nascent Limbaugh divestment movement, Brian Glicklich’s website advertised his experience helping “high profile individuals and organizations achieve tactical and strategic goals through the highly leveraged use of the Internet.” His clients, including broadcasters, paid top dollar for his assistance in overcoming organized opposition and boycotts — like, say, StopRush.

But he also has deep and abiding ties with Limbaugh. Glicklich’s company profile brags of creating and leading the digital division of Premiere Radio Networks as its senior vice president. He also owns Limbaugh-related domains such as rushbabesforamerica.net, nationalorganizationforrushbabes.com, and rushfacts.com — all URLs associated with his failed efforts to repair Limbaugh’s image. On his profile at the Huffington Post, where he has written a screed attacking Media Matters’ Eric Boehlert, Glicklich lists himself as “the Spokesperson for The Rush Limbaugh Show” — not just one of Limbaugh’s spokesmen, but The Spokesman.

Glenn Beck is another longtime client of Glicklich, who owns Beck-related domains such as theblazetv.com. Beck, who was the subject of a successful divestment effort by Color of Change that killed his advertising and led to Fox News cancelling his show, is now a webcasting millionaire and defamation defendant. Glicklich’s goal is to prevent that fate from happening to another right wing hate radio client.

Like Mercury Radio Arts President and COO Chris Balfe, Glicklich uses Austin-based security guru Spencer Coursen to do his threat assessments. A consultant for the film Zero Dark Thirty, Coursen was arrested in May after his client, the widow of “American Sniper” Chris Kyle, found that he had improperly charged her credit card for thousands of dollars in car rentals.

Glicklich’s boss is Michael Sitrick, who proudly admits to being a professional spinmeister. In his press coverage, Sitrick compares himself to ‘The Wolf,’ the mob fixer character in Quentin Tarantino’s film Pulp Fiction. The firm’s clients have included Michael Vick, the NFL star convicted of taking part in an illegal dog-fighting ring; the Church of Scientology; and the Catholic Archdiocese of Los Angeles, which needed help during the pedophile priest scandal of 2002.

One of Sitrick’s biggest brags is that he got news outlets to change or delete their coverage of Papa Johns pizza magnate John Schnatter after the CEO told an investor conference call in 2012 that Obamacare would ‘force’ him to jack up the price of his pies — rather than, say, foregoing a new addition to his underground 22-car garage.

Toadying to the rich and infamous is apparently very rewarding work: Glicklich lives in a $1.8 million home in Agoura Hills, California with his wife and three children because Sitrick reportedly charges these clients $900 an hour. But whatever Rush pays them, it’s far too much money for what he’s getting.

In the wake of the DCCC petition, Limbaugh seems to have panicked over his continued toxicity. But instead of cleaning up his act, the bloviator decided to send his personal goon squad after the activists who have given him such tremendous butthurt.

Suddenly, Glicklich appeared in the Twitter streams of #stoprush activists, accusing them of a ridiculous conspiracy theory drawn from the fringe-addled depths of his imagination. He has pushed this narrative through right wing outlets like WorldNetDaily, the original birther website; CNS News, whose reporter, Michael Chapman, immediately confused me with actor David Boreanaz; and Breitbart.com, where anti-masturbation crusader and professional bully Ben Shapiro works.

In terms of facts, Glicklich has merely published a few names and email addresses of StopRush volunteers who tweet. Presenting absolutely no proof that any of them has any relationship whatsoever with Media Matters For America, Glicklich maintains that this tiny group of random activists (that he has selected) are the only actual StopRush activists in the world — and that they are doing something illegal, or at least immoral, on behalf of MMFA founder David Brock.

Just to give you an idea how silly this is, the FlushRush Facebook group has more more than 20,000 members. No more than about 10% of StopRush activism has ever taken place on Twitter at any time in the last two years. Yet Glicklich encourages Rush Limbaugh’s fans to send people disgusting emails on this misbegotten basis, and keeps tweeting his nonsense in the vain hope that enough false headlines and intimidation will magically disappear more than 300,000 petition signatures, restore thousands of lost advertisers, and convince the world that only a few malcontents dislike the Dear and Widely Beloved Leader Rush Limbaugh.

Glicklich also noticed that some (though by no means all) of those #stoprush tweeters had a Unite Blue twibbon on their accounts, so he accused the creator of that group of participating in his imaginary Twitter conspiracy. Glicklich has tried projecting some really absurd powers on Mr. Zach Green, the Twitter API developer who created #UniteBlue and who has worked in the past with Herman Cain as well as other tea party candidates.

In Glicklich’s bizarre narrative, StopRush Twitter users are all somehow violating the social media network’s rules with as-yet unnamed, magical software tools that do not actually exist anywhere on the internet. That ought to put his credibility somewhere between the chupacabra and fake moon landings, but of course it’s also why he shopped the story to a birther website.

Smears will not slow down StopRush. Quite the opposite, really

With first-stringers like Glicklich, it’s no wonder Rush Limbaugh is losing the war against his critics. In fact, the movement hasn’t been this energized since 2012; Glicklich’s smears have had the opposite effect from the one he intended. Sure, he’s managed to get some fringe right wing sites to repeat them credulously, but no major media outfit is going to touch his story because it’s quite obviously bunk — and his client is extremely toxic.

Indeed, Glicklich seems to imagine that he can make StopRush activists so hated that Americans will somehow forget how much they dislike Limbaugh. But that is not going to work because they are not on the air every weekday making bigoted remarks like he is. Furthermore, the radio industry is changing in ways that reduce his audience and influence even without the help of divestment activists. The huge price tag of his show is no longer justified by the revenue he brings in.

It’s just a matter of time before gravity — or an investors’ conference call — brings reality crashing down on the soft protective bubble around Rush Limbaugh. 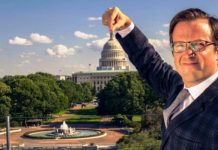 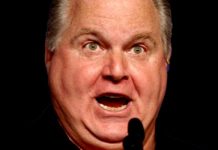