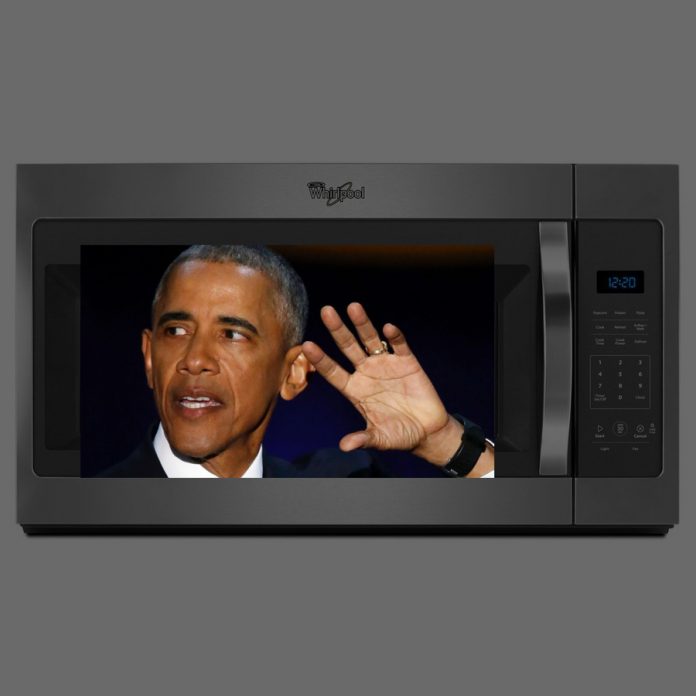 The worst fears of Trump supporters has been realized. Barack HUSSEIN Obama is SPYING on you using your beloved home appliances to accomplish his foul, nefarious, Islamic aims.

Do you believe Kellyanne Conway? In an interview with the Bergen (NJ) Record, Conway revealed the scope of this demonic plan to snoop on us all.

In a wide-ranging interview Sunday at her home in Alpine, where she lives with her husband and their four children, Conway, who managed Trump’s presidential campaign before taking the job as one of the president’s closest advisers, suggested that the alleged monitoring of activities at Trump’s campaign headquarters at Trump Tower in Manhattan may have involved far more than wiretapping.

“What I can say is there are many ways to surveil each other,” Conway said as the Trump presidency marked its 50th day in office during the weekend. “You can surveil someone through their phones, certainly through their television sets — any number of ways.”

Conway went on to say that the monitoring could be done with “microwaves that turn into cameras,” adding: “We know this is a fact of modern life.”

Microwaves. Phones. Televisions. And, frankly, I don’t like the way my thermostat has been looking at me lately.

Of course, dedicated supporter of President Trump that you are, you know what you have to do.