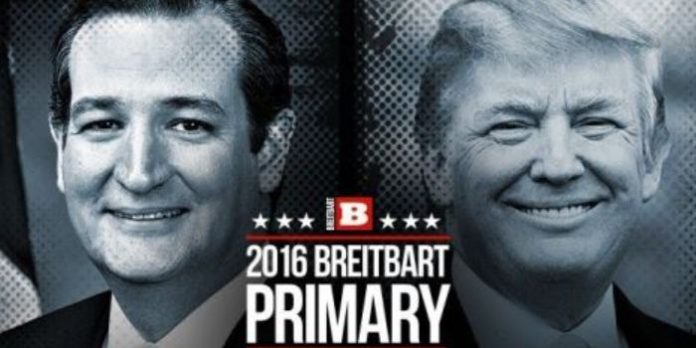 The biggest political story over the weekend was Sen. Ted Cruz taking a ten-point lead in Iowa polling, a story that had the chattering classes wondering where the seemingly-sudden surge had come from and whether it boded ill for Donald Trump. But for those of us who’ve been paying attention to right wing media since the summer, Cruz’s current position is not so unheralded and was entirely predictable. For example, consider this passage describing the results of a Breitbart News opinion poll conducted at the end of July:

Indeed, Cruz has shrewdly avoided alienating Trump voters at every turn, instead proffering a marginally-milder version of Trump’s vision for an America free of Muslims and religious freedom. By letting Trump absorb the harshest criticisms for his outspoken bigotry, Cruz’s extreme Dominionist ideology seems relatively saner by comparison — a clear example of the ‘Overton window’ theory of right wing politics at work. The strategy has worked brilliantly: Cruz is now the second choice of nearly half of Trump’s voters. And it’s not as if Trump has declined in Iowa; on the contrary, he’s actually two points higher in this latest poll than where he stood in October.

In a year when big money advertising blitzes are not turning out the expected rewards for Republican establishment candidates, that’s good news for hedge fund billionaire and alleged tax-dodger Robert Mercer, who is reportedly Cruz’s biggest financial backer and the top political donor in the country. It’s also great news for Breitbart.com, on whom POLITICO says that Mercer has showered unknown sums to encourage good coverage of Cruz. The Senator from Texas has always enjoyed a close relationship to Breitbart even when its writers have posted the occasional negative story about him; he went so far as to run interference with the IRS when the website was audited last year.

Staff rumors about Trump buying into a similar symbiosis point to just how routine this sort of arrangement really is at the ‘independent’ website, which claims almost 19 million unique viewers per month. Breitbart has become one of the most powerful outlets in conservative news this way. ‘The Donald’ promulgated his immigrant deportation plans through the site in August because it is the best-positioned conservative site for airing extreme, reactionary ideas, as a simple scan through the comment sections of most stories there will show. Some staff writers, such as John Nolte, have practically fallen all over themselves defending Trump with the most hysterical fabrications money can buy.

These incestuous relationships, which would be excoriated for days by Fox News and the right wing bubble if they were discovered in a ‘liberal’ publication, go back much further than Cruz’s election to the US Senate. In fact, they are a direct reprise of the infamous Citizens United front group which made our freewheeling era of unrestrained campaign finance possible. From POLITICO:

Breitbart executive chairman Steve Bannon has worked with Mercer on political projects including Cambridge Analytica, according to conservative finance operatives. They describe Bannon as something of a gatekeeper for Mercer, a New York hedge fund magnate who keeps a close circle of associates and has not publicly advocated for Cruz. (Emphasis mine)

That’s the same Steven K. Bannon who directed such unremarkable right wing classics as the Obama hit-piece The Hope and the Change, the incomprehensible Sarah Palin ‘documentary’ Undefeated, and the deranged, conspiracy-addled Occupy Unmasked on behalf of the Citizens United organization whose name is synonymous with billionaire political spending.

In addition to allegedly providing those right wing funders with a way to propel their most radical candidates by purchasing page views and positive mentions, Bannon’s website may also be data-mining their readership on behalf of their well-heeled customers. The Guardian reported this weekend that a little-known data company within the Cruz campaign has been paying researchers at Cambridge University — the aforementioned Cambridge Analytica — to assemble psychological profiles of potential voters through a deceptive Facebook survey.

Documents seen by the Guardian have uncovered longstanding ethical and privacy issues about the way academics hoovered up personal data by accessing a vast set of US Facebook profiles, in order to build sophisticated models of users’ personalities without their knowledge.

[…] Analysis of Federal Election Commission (FEC) filings shows Cruz’s campaign has paid Cambridge Analytica at least $750,000 this year. The “behavioural microtargeting” company has also received around $2.5m over the past two years from conservative Super Pacs to which Mercer or members of his family have donated.

The ‘Breitbart Primary’ will be the best election that right wing billionaires can buy. Given that Mercer, Bannon, and Cruz are so invested in the site, this technology is probably in use right now at Breitbart News, with Cambridge Analytica identifying readers and commenters for highly-focused ‘get out the vote’ efforts. If not already in place, it surely will be at some point, probably before the Iowa caucus arrives on the first day of February.