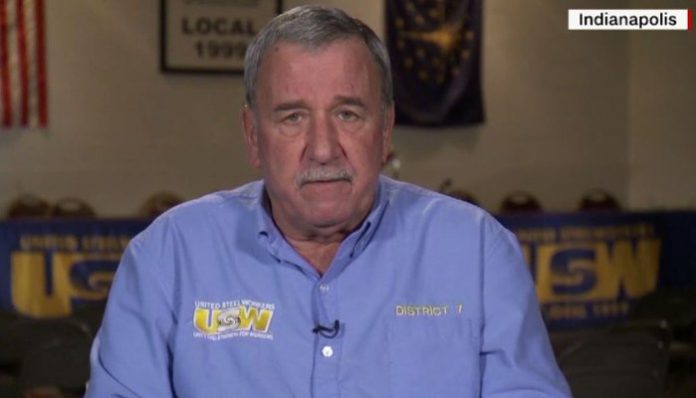 The salt of the earth knows that Donald Trump is the scum of the earth.  Chuck Jones is the president of United Steelworkers 1999, which represents Carrier workers in Indiana. Jones succinctly summarized President-elect Donald Trump’s visit to Indianapolis last week: “he got up there and, for whatever reason, lied his ass off.”

John Nichols of The Nation nicely broke down the “deal” in his article, “Chuck Jones Is a Better President Than Donald Trump Will Ever Be,” as follows:

To paraphrase former President George W. “He kept us safe” Bush: That is some fuzzy math! Chuck Jones hit the nail when he said about Trump: “What he did was he gave false hope for three days to people that worked in that facility that they might not lose their job.”  Indeed, on the campaign trail, Trump gave working people false hope that he would fight for regular Americans against a system that was rigged against them.  However, after the election he turned around and appointed the people most directly responsible for the misery of the middle class to high cabinet positions. For his evangelical blue collar followers, it was a kiss and betrayal for thirty silver coins.

This Carrier “deal,” a crony capitalism bonanza if there ever was one, likely has CEOs across the nation thinking about threatening more offshoring in order to bamboozle Trump into hooking them up with sweet tax breaks and federal perks.

Donald Trump, as oversensitive man-children are prone to do, went apoplectic on Twitter after learning of Jones’ commentary: Jones told MSNBC’s Lawrence O’Donnell: “Nothing that says they’re gonna kill me, but, you know, you better keep your eye on your kids. We know what car you drive. Things along those lines.”

Chuck Jones is a man’s man, with a man’s face: But Trump supporters don’t identify with real American hero Chuck Jones, who truly represents the best interests of the working man. Instead, they side with the billionaire who was born, as former Texas Governor Ann Richards (God rest her soul) once famously said about former President George H.W. Bush, with a “silver foot in his mouth.” Reality television star/huckster/President-elect Donald Trump, like B-list actor/conman/former President Ronald Reagan, has ingeniously figured out how to make working people cannibalize for dinner. The recipe for working-class destruction gumbo calls for 1/2 teaspoon of “they’re taking our guns,” 1 tablespoon of “they’re taking our jobs,” and several pounds of “Democrats are baby-killing abortionists.”

Passengers on the Trump Train will continue to eat themselves alive without conscious sedation, despite the mounting evidence that their idol’s populism was but a ruse. The salt of the earth, Chuck Jones, knows that Trump is the scum of the earth. However, Trump’s working class supporters are content to be grout in his “Great Wall of Mexico.”