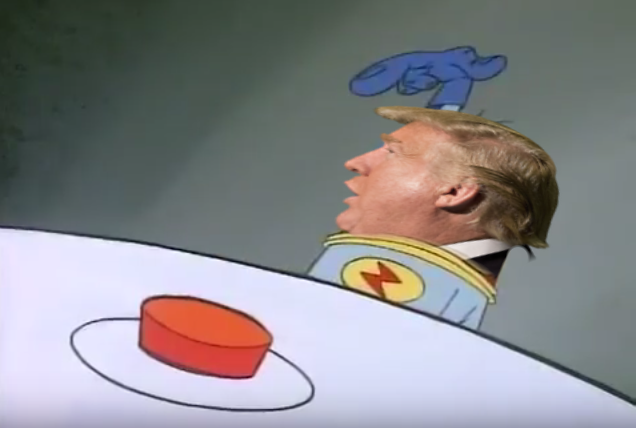 Trump’s button is the biggest button in the world. Nobody else’s button can even compare in magnitude and virility.

North Korean Leader Kim Jong Un just stated that the “Nuclear Button is on his desk at all times.” Will someone from his depleted and food starved regime please inform him that I too have a Nuclear Button, but it is a much bigger & more powerful one than his, and my Button works!

The world trembles in fear in the shadow of Trump’s button. His big, shiny, red button. His jolly, candy-like button.

Just like certain blog owners who brag, then reprint past blog posts re-bragging about their “minor league blogs” compared to other websites, nothing says “sexual security” like boasting about one’s button.

All in one day, Trump has button-boasted, threatened to withhold funding from the Palestinian Authority and Pakistan, made the Iranian peoples’ protest all about him, and proclaimed an awards-contest for The Most Dishonest and Corrupt Media.

I will be announcing THE MOST DISHONEST & CORRUPT MEDIA AWARDS OF THE YEAR on Monday at 5:00 o’clock. Subjects will cover Dishonesty & Bad Reporting in various categories from the Fake News Media. Stay tuned!

No idea who’s gonna win that one. Is Trump giving us a clue?