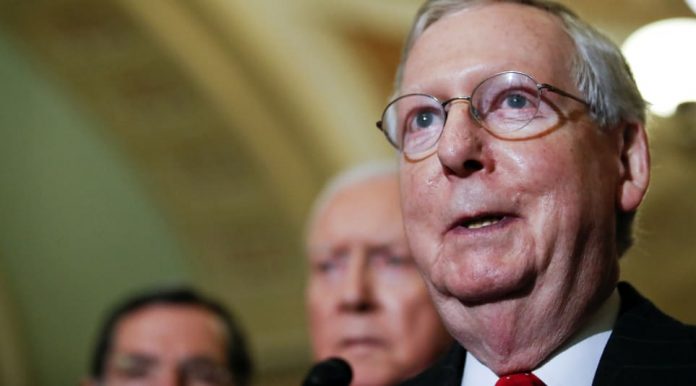 Any possible claim the GOP could make that the incipient Federal Government Shutdown was brought on by Democrats vanished in a puff of smoke tonight as Republicans failed to get even 50 votes to close debate on the House-passed Continuing Resolution. As things stand at the moment, the cloture vote is 50-48 with Senator McCain and Mitch McConnell not voting yet. Without the four Democratic votes, McConnell could only manage 47 of his 51 Republican Senators.

Forget the whinging of the Fourth Branch of Government on Fox News. Forget the misleading headline in the New York Times. The government was not laid low by the Democrats. This is a mess of the GOP’s own making.

Four GOP senators, Graham, Flake, Lee and Paul, voted against their party leaders. Four Democrats voted for the cloture. Therefore, Majority Leader Mitch McConnell must bear the full blame for the legislative disaster that led to the shutdown of the US Government on the first anniversary of the Trump Presidency.

There was a deal. It was a deal Trump said he would sign. It was a deal that would have added money for border security as well as protection for the 800,000 “Dreamers.” Senators Schumer and Graham had hammered out a bipartisan agreement that was met with favor on both sides of the aisle. Trump blew that deal out of the water after getting “advice” from his Chief of Staff and far-right members of the House and Senate.

If McConnell had the testicular fortitude to place that bill on the floor tonight, before midnight, that bill would pass. Because the GOP is poopy-pants scared of Trump’s white supremacist base, they won’t challenge the Dear Leader.

It only took him a year. But he did it. Donald Trump has dragged the Government of the United States of America to the ground.

His foam-flecked right wing base will salute him for it. He’s “Making America Great” by destroying the government.